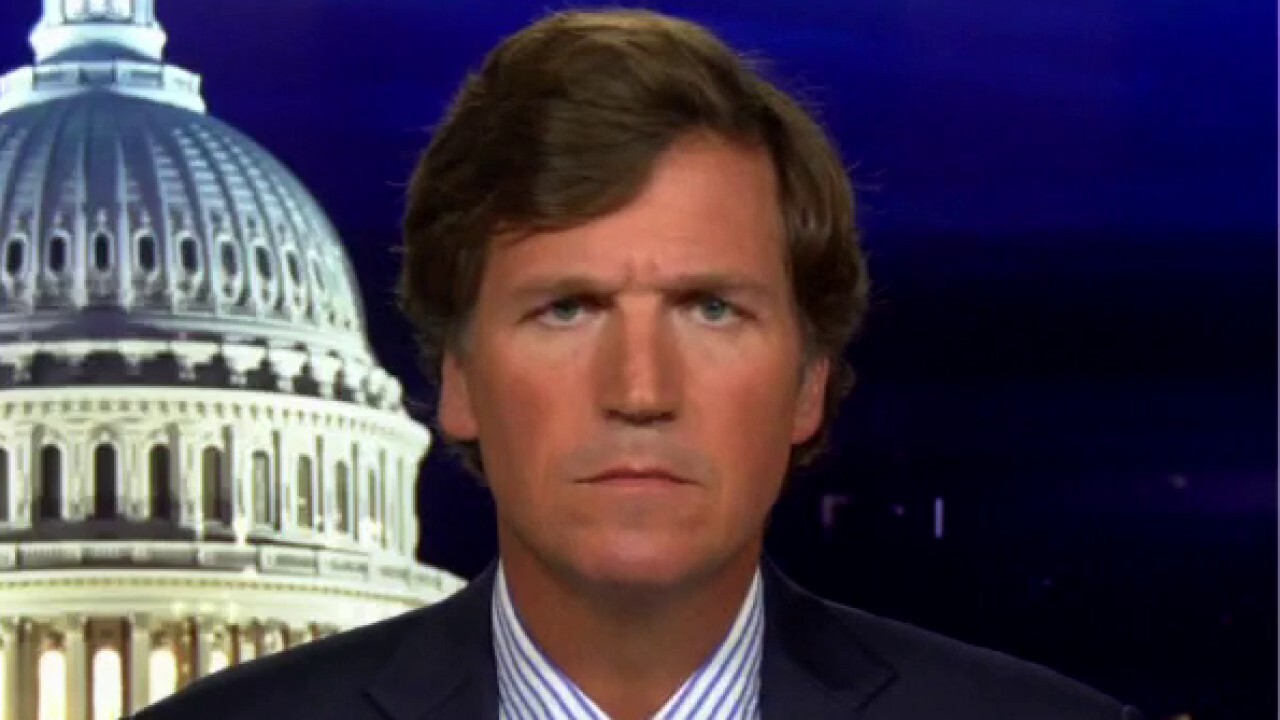 For more than a month, mobs of violent crazy people have roamed this country, terrorizing citizens and destroying things. No one has stopped them from doing that, so they’ve continued and they’ve become stronger.

Politicians now cower before the mob. Corporate America mouths their slogans. The education cartel, enforced on your children, enforces their demands.

Police officers, emasculated and restrained, watch it all from the sidelines, unable to help.

ST. LOUIS COUPLE WHO BRANDISHED GUNS BEING INVESTIGATED AFTER CLASH WITH PROTESTERS

For weeks we’ve asked, “who will stand up for this country?” And the answer we’re learning is Americans. Americans will. It’s up to them.

Small groups of citizens are beginning to come forward to defend their laws, defend their history and their culture.

Antifa does not own these things, neither does Black Lives Matter. They have no right to destroy them.

In New York City over the weekend, a group of citizens gathered to defend a statue of Teddy Roosevelt. Teddy Roosevelt was the most popular president in the history of this nation. That’s partly because he was a sterling moral example.

Antifa wants him erased. Local officials have said that they will comply with that demand.

No one asked the public what the public thinks of this. Our leaders don’t care what they think. This group decided to be heard.

UNIDENTIFIED FEMALE:  We will see to it that you fall and you fall so hard you won’t know what hit you.

UNIDENTIFIED MALE:  Yo, lady. Check your (bleep) privilege and get back over there.

UNIDENTIFIED MALE:  No, you can talk about over there.

UNIDENTIFIED FEMALE:  No, I’ll stand wherever I want.

UNIDENTIFIED MALE:  I think you — you’re bigots. You don’t understand the consequences.

UNIDENTIFIED FEMALE:  Is that the best you’ve got, little boy?

That’s the New York we love. Is that the best you’ve got?

Yes, actually it is the best they’ve got. Tear off the masks. Turn down the volume and you see it very clearly. The mob is not fearsome, it’s pathetic. These are pampered children play-acting at revolution.

They are cowards. That’s why they move in packs.

They have no skills. All they can do is destroy.

The closer you get to them, the clearer all of that is.

UNIDENTIFIED FEMALE:  They’re trying to find this as a racial issue. This is not about race anymore. It never really was. This is about taking apart the fabric of America.

Last week, he issued an Executive Order to protect our monuments from the mob.

On Saturday, the Department of Justice charged four people with destruction of federal property for vandalizing monuments right across from the White House.

MSNBC anchors enjoy seeing statues topple as they glide by in their car services. It makes them feel alive.

UNIDENTIFIED MALE:  In another sign of where his priorities are, during this time, the president signed a new Executive Order yesterday centered on protecting monuments, memorials, and statues, not people.

LAURA COATES, CNN LEGAL ANALYST:  So, he threatens prison terms. He threatens retribution. He defends statues. He ignores the substance of the message and wholly misses the mark.

UNIDENTIFIED FEMALE:  President Trump signed an Executive Order about the protests, but not to protect people dying at the hands of the state. Instead, he signed an order that denounced protesters who vandalize Civil War monuments, protecting statues while real people suffer and some die.

They are such liars. Civil War monuments. They are taking down statues of Abraham Lincoln. But did you catch the last line — while real people suffer?

Well, Patricia and Mark McCloskey are real people. They live in St. Louis, as their city degraded and fell apart around them became dirty and dangerous over the last decades, they did not flee to the suburbs. Many of their neighbors did, but they stayed in their home.

They’ve been in the same home for 32 years. They’ve rebuilt it entirely, slowly, painstakingly. They love it.

On Sunday, the McCloskeys sat in their backyard together having dinner. Suddenly, as they ate, a mob of hundreds of screaming people destroyed a wrought iron gate with a no trespassing sign on it and came pouring in, moving toward them quickly.

The McCloskeys were terrified. They watched as mobs looted and burned and assaulted citizens around the country.

This mob was clearly intense on violence. They said so.

When Mark McCloskey told them to leave, the mob threatened to murder him and his wife. Then they threatened to kill the family’s dog.

Panicked, the McCloskeys called the police. Then they called the neighborhood security patrol, but no one came. They had no choice to protect themselves.

They went inside and got their, yes, legally registered firearms.

Met finally by citizens who dared defend themselves, the mob retreated and melted away. But the terror did not end.

The sight of ordinary Americans standing up for themselves and their home enraged our professional class and they immediately put the McCloskey’s name and their home address all over the internet.

Mark McCloskey spent last night boarding up his office downtown. He had no choice. Still, no one stepped forward to protect the McCloskeys. Not one person.

There’s a lot he could have done.

The governor could have announced that as long as he runs the state, no citizen will be prosecuted for exercising the most basic of all rights, the right of self-defense against the mob.

But the governor didn’t do that. In fact, he did nothing. And so, sensing they were completely undefended, the jackals descended on the McCloskeys.

St. Louis’s District Attorney, a woman named Kim Gardner announced that she was considering filing criminal charges against the McCloskeys for resisting the mob. — A mob that was threatening to murder them.

The media, meanwhile, immediately said about trying to show the McCloskeys were racists.

Here’s how The Washington Post framed this story, “As the peaceful crowd of about 500 walked along a private gated street, a white couple who emerged from marble mansion had something else in mind.”

The New York Times agreed. This was definitely a hate crime.

“President Trump on Monday morning retweeted a video of a white man and woman brandishing a semi-automatic rifle and a handgun at peaceful black protesters.”

Almost every word a lie. In fact, the mob was not “black,” whatever that means. And it definitely wasn’t peaceful. It was murderous.

Nor did anyone explain what the McCloskey’s race had to do with anything.

A white man? A white couple? OK. They are.

So what? Why is that relevant? Why is it ever relevant in a situation like this?

It’s not, but again, no one bothered to explain.

Online, the mob’s digital enablers took the bait. They know what to do. Time to hate the McCloskeys.

A longtime libertarian activist in Washington named Jerry Taylor immediately tweeted this: “If I were in that march, and these racist lunatics were waving guns at me, I’d like to think I’d rush them and beat their brains in and I wouldn’t apologize for it for one goddamn second.”

Jerry Taylor, by the way, isn’t some lone lunatic. He runs a think tank in Washington. It’s called the Niskanen Center, and yet, here was Jerry Taylor, libertarian in good standing, encouraging brutal violence against strangers for defending themselves.

No one even seemed to notice, nobody cared. The message to everyone else was crystal clear: The mob is in charge, their power cannot be curbed. Don’t even consider defending yourself. Self-defense is racist.

Michigan Governor Gretchen Whitmer, all but said that out loud on Monday.

Whitmer demanded that her state make “racially motivated 911 calls a hate crime.” Making false 911 calls is already a crime in the State of Michigan. So what will be the purpose of this order? You know the answer — fear.

The mob wants the power to destroy anyone who wants police protection from “mostly peaceful protests.”

It’s an impediment to their power. So Gretchen Whitmer is trying to sweep it away.

You can see exactly what’s coming. It’s obvious what they’re planning. What’s fascinating is the people doing this know it, too.

On Friday, the Minneapolis City Council voted unanimously to abolish their city’s police department. A number of them explained why they’re voting this way:

UNIDENTIFIED MALE:  And now is the time for us as a city to start paying the community members who have been doing this work for decades and need to get paid. All of that money has been going into the police department and what have we gotten in return? Pain, trauma and hurt.

UNIDENTIFIED FEMALE:  We will be taking intermediate steps towards ending the MPD through the budget process.

UNIDENTIFIED FEMALE:  Showing up as a person who believes that we should and can abolish our current Minneapolis police system.

Those were awfully emphatic statements, so it might be easy to be misled by them.

You pay for them. They stand outside their homes.

Of course, they did that. They don’t want to get hurt.